I recently picked up a Raspberry Pi 4 8GB model to use for some lightweight server tasks on my home network. After setting up Pi-Hole, OpenVPN, Plex, and Samba, I got curious about using it to re-encode some videos I had. The videos are on an external drive being monitored by Plex and shared on the network by Samba, and some are quite large since they’re at a (likely unnecessarily) high bitrate. Trimming them down would help save a bit of space, and gives me an excuse to play around with Python, FFmpeg, and the Pi’s hardware accelerated video encoder. In this post, I’ll cover how to get FFmpeg setup to use the Pi 4’s video encoding hardware on a 64-bit OS and the little encoding manager/dashboard, FBED, that I put together to monitor the progress of the encoding tasks.

Some initial searching about what encoder to pick in FFmpeg for hardware accelerated encoding on the Raspberry Pi pointed me to the h264_omx encoder. Unfortunately, if you try running this on a 64-bit OS you’ll get errors that libOMX_Core.so and libOmxCore.so weren’t found. Even after installing libomxil-bellagio-dev these continue to not be found, as this package provides different libraries than the OMX ones being searched for. It’s possible that making a symlink here would work, but I didn’t test that (it seems a bit iffy). However, it sounds like the h264_omx encoder is considered deprecated and won’t be supported on 64-bit OS’s.

Instead, FFmpeg provides the h264_v4l2m2m for hardware accelerated encoding/decoding which is supported on the Raspberry Pi 4 and a 64-bit OS. It seems like the v4l2m2m API is the new API that folks are moving forward with. However, if you install ffmpeg from apt and use the h264_v4l2m2m encoder, the results are not very good: 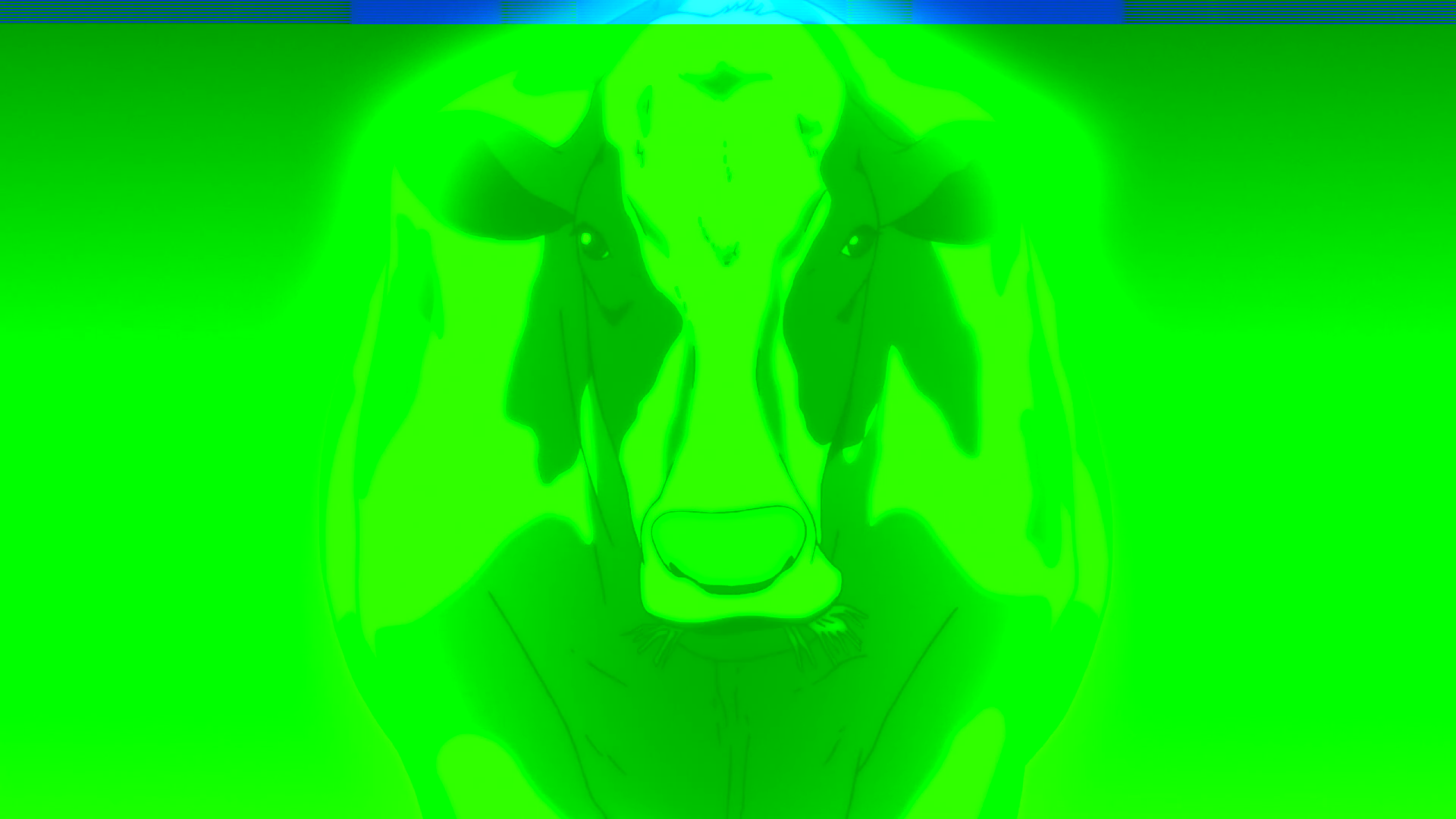 Figure 1: Not quite what we're after.

The version of FFmpeg distributed in apt (4.2.4) is missing some commits that fix this issue, which didn’t make it in til release 4.3. So we’ll have to build from source. First, we can grab the source for 4.3 from Github:

Then follow the build guide for Ubuntu. Since this will replace your install of ffmpeg, you’ll also want to setup the third party libraries mentioned in the guide to get support for libx264/265 CPU encoding and any others you want. As with the guide, I recommend not installing to /bin/ to avoid conflicts with the system package manager. Instead you can install to ~/bin/ as in the guide, or in the repo directory (as I do here), and add the directory with the binaries for ffmpeg and ffprobe to your $PATH. My configure command is below:

Now we get a correct video output, powered by hardware accelerated encoding! Using the hardware encoder the Pi can encode this 1080p video at 53-60 FPS, compared to just 8-10 FPS when using the libx264 CPU decoder. With this running, I could now re-encode the set of videos I wanted to trim down using the Pi’s hardware encoder for better performance. While a bash script would do, a lot of the files have spaces in the names which makes it a bit of a pain in bash, and just running ffmpeg directly doesn’t give some information I’d like about the estimated time left and progress so far. Instead, I decided to script the batch conversion in Python using ffmpeg-python and put a basic command line UI on top of it using urwid. The result is FBED - FFmpeg Batch Encoding Dashboard, shown below. 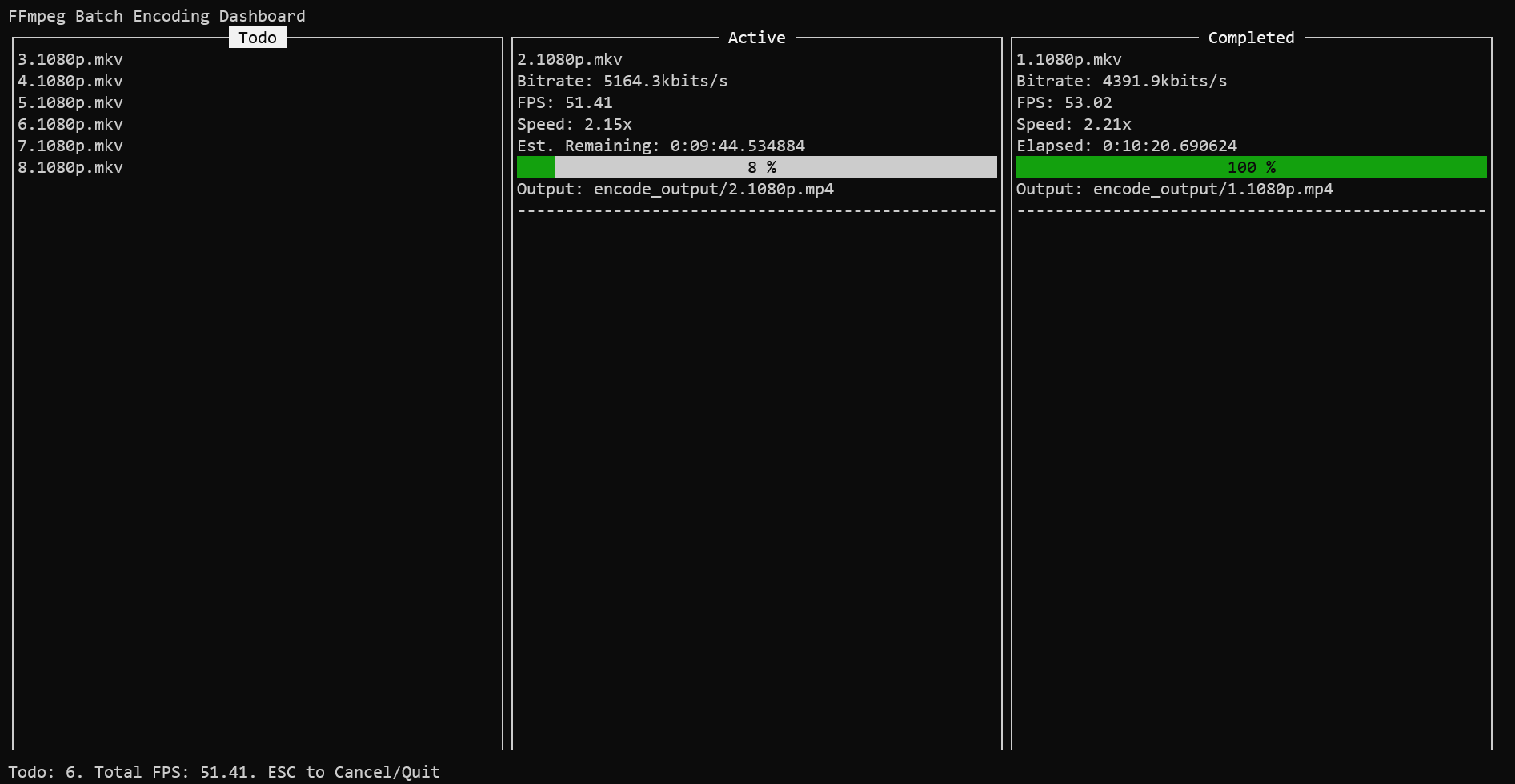 FBED takes the number of parallel encodes to run and a list of files or directories to encode, and will then encode them all using FFmpeg. FBED can run multiple encodes in parallel by running multiple FFmpeg subprocesses, if the hardware can support it. On the RPi4 I didn’t observe much overall speed-up running two 1080p encodes in parallel to each other compared to a single one, though have gotten speed-ups for parallel encodes on lower resolution videos.

FBED has a few settings hard-coded in it that I found to work well for my use case. The script will pick the output target bitrate based on the video resolution, which you can increase or decrease as desired by editing the script:

You can also change the encoder used to select a different hardware encoder (e.g., h264_nvenc on Nvidia GPUs, h264_qsv on Intel GPUs, etc.) by changing the value of c:v in the encoding_args to your desired encoder. You can also pass additional arguments to the encoder by adding them here. If you’re on the RPi4 using h264_v4l2m2m I recommend leaving the num_output_buffers and num_capture_buffers as I’ve set them, which raises their values above the defaults of 16 and 4 respectively. When running parallel encodes of 720p and smaller videos I would get warnings from ffmpeg that the capture buffers where flushed out to user space, and to consider increasing them. These are set high enough that I don’t seem to get these warnings, though will cause the memory capacity of the encoder to be exceeded if trying to do multiple 1080p streams in parallel. In that case you’d want to set them to half their current value (i.e., to 16 and 8 respectively). Do not modify or remove the progress parameter, as this is required by the dashboard to get progress information from FFmpeg, discussed below.

The aspect of FBED that’s probably most interesting to other folks writing scripts using FFmpeg is how the progress monitoring works. This is done using FFmpeg’s -progress argument which has FFmpeg output program-friendly progress information. An example of this output is shown below. The Python script gets this output by opening a pipe with os.pipe() and passing the write end of this pipe to the FFmpeg subprocess. The script then reads from the read end of the pipe every second to get the latest progress message to update the UI.

Once we know the current time point FFmpeg has reached (out_time) and total length of the video we can compute the percentage of the video FFmpeg has finished so far to display a progress bar:

Since we also know how fast FFmpeg is encoding the video relative to regular playback speed, we can estimate how much longer it will take until the encoding is finished:

FBED was a fun weekend project for my Raspberry Pi 4 and I’m impressed with the video hardware’s encoding performance! While I could have just run FFmpeg manually to encode the videos I wanted to re-encode in less time, it certainly wouldn’t have been as fun. It’s also pretty easy to configure FBED to pick a different encoder to take advantage of different machine’s capabilities, so it could come in handy in other server encoding environments as a dashboard for FFmpeg. The code is available on Github, so check it out and let me know if you find it useful!